Samsung Galaxy A52 Review and Specs. A couple of weeks ago, I unboxed the Samsung Galaxy A52 and gave my first impressions. In case you didn’t know, the Galaxy A52 is one of the latest A series devices announced with a brand new design and IP67 water and dust resistance. This time around, Samsung focuses on three areas– the battery, camera, and screen life. I’ve been using the phone for a couple of weeks and here’s the full review. 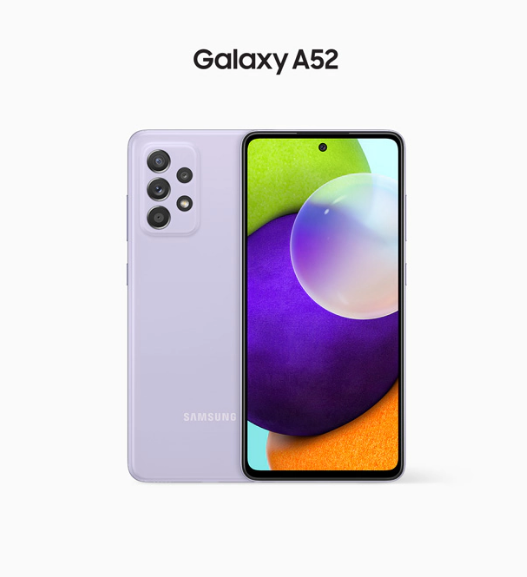 Looking at the design of the Samsung Galaxy A52, you’ll immediately know that it’s not a premium high-end phone. It has reasonable thick bezels around the screen, and I said “reasonable” because it’s okay for a phone like this to have thick bezels.

There’s a silver trim around the 32MP front camera cutout, something you won’t see on a Samsung flagship phone. Unlike the S21 Ultra, the A52 has an optical in-display fingerprint sensor, which can only register up to three fingerprints only. No idea the reason behind but I guess it’s about security concerns. Obviously, the fingerprint sensor is not as fast as the ultrasonic one on the S21 series, but the speed is still okay.

The back of the phone is a piece of plastic and Samsung did well to blend in the camera bump with the back design. The phone looks unique especially in colors like Awesome Violet and Awesome Blue, straight up you will know this is a phone targeted at youths. It also comes with an IP67 rating for water and dust resistance. Keep in mind that plastic is more prone to scratches than glass, but it won’t break like glass.

The Samsung Galaxy A52 sports a 6.5-inch Full HD+ Super AMOLED Infinity-O display with a 90Hz refresh rate. Since this is one of the three focus areas, you’ll expect it has good screen quality. No doubt, the A52 has the best display in its class, and I actually enjoy watching videos with this phone. The silver trim around the camera cutout sometimes annoys me. Having the 90Hz refresh rate feels a lot smoother when scrolling through the screen.

Powering the Samsung Galaxy A52 is a Qualcomm Snapdragon 720G processor, which was introduced in early 2020. The chip is fabricated on Samsung’s 8nm LPP process that features six Kryo 465 Silver high-efficiency cores operating at 1.8 GHz along with two high-performance Kryo 465 Gold operating at 2.3 GHz. Paired with 8GB RAM and 256GB storage, the A52 actually performs quite well on daily basis. When it comes to gaming, it handles light games like Alto’s Adventure pretty well. When it comes to graphics-intensive games, you’ll need to tune down the settings.

The A52 runs on One UI 3.1 on top of Android 11 and the overall user experience is quite similar to S21 Ultra, which you can check back the review here. There are some features missing though since some features such as the S Pen support are only exclusive to the S21 Ultra. Like the S series, the Samsung Galaxy A52 will get software upgrades for three generations, and regular security updates for a minimum of four years.

Image quality generally is pretty good and photos taken with the main camera and ultra-wide camera are now more consistent in terms of white balance and detail. By default, the main camera shoots 12MP photos, but you can shoot 64MP photos by switching to 64MP mode. With OIS and Night Mode, its main camera now shoots better low-light photos.

The phone packs a 4,500 mAh that also supports 25W fast charging, and it even comes with a charging brick in the box! Based on my usage, I was able to get around 2 days of battery life with 7 hours of screen-on-time. That’s really impressive! Charging the phone from 15% to full took me around an hour.

Retailing at RM1,499, the Samsung Galaxy A52 no doubt has a few best-in-class features– the camera, screen, and battery life. You can just go right ahead and buy the phone if these three factors are important to you. The performance might not be the best compared to others, it’ll still get the job done. The plastic back won’t be a concern for most people as they will just snap a case on it. Plus, Samsung Malaysia now also offers the Standing Cover (worth RM109) for free when you purchase the A52.

The Samsung Galaxy A52 is now available at:.